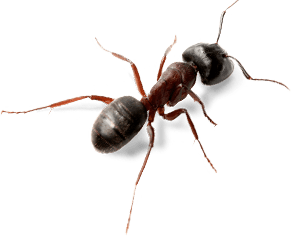 Ants are the most commonly encountered insect pests within households, and several species are well known for establishing particularly stubborn infestations that are exceedingly difficult to eradicate. The most common ant pest species in New York state include black carpenter ants, pavement ants, odorous house ants and Pharaoh ants, and each one of these species is capable of nesting indoors. Carpenter ants and Pharaoh ants are both notable for their habit of establishing multiple nests within a single structure. Indoor nests are almost always secondary nests inhabited by workers, and in some cases, secondary reproductives. Secondary nests are often referred to as “satellite nests,” or “sub-nests,” while the primary nest, which is almost always located outdoors, is known as the “parent nest.”

Just like termites, most bee species, and many wasp species, ants are eusocial insects that live in colonies where the constituent members are divided into three primary groups, or “castes” known as queens, males and workers (females). The ants that people observe both indoors and outdoors are workers that regularly leave the nest to gather food sources and to establish additional sub-nests. In many infestation cases, a large number of workers invade homes from outdoor nests in order to seek out food sources. If easily accessible food sources are found indoors, a large number of additional ants are likely to follow. Heavy ant infestations indicate the presence of one or more indoor nesting sites.

It is not uncommon for homeowners to spot long trails of worker ants indoors, and one trail can consist of hundreds of even thousands of ants. Ant trails are often spotted moving along structural elements like cables, wires or pipes that lead into homes. Following ant trails will lead to their nesting site, and if they are found crawling out of electrical sockets, baseboards or holes in walls, they are likely nesting within a wall void.

Carpenter ants are the most commonly managed ant pests in the US, and they are particularly abundant in the northeast where they often establish nests within moist woodwork. While carving out tunnels within wood, carpenter ants discard sawdust through holes in infested wood. Spotting piles of sawdust within a home is a common indication that a carpenter ant infestation has been established. Wood infested by carpenter ants will sound hollow when tapped with a screwdriver, but these ants usually infest wood located within inaccessible indoor areas, such as wall voids. Surprisingly, ants nesting indoors can produce rustling sounds that are audible to humans, and pest control professionals possess special equipment like acoustic detectors that can verify whether odd indoor noises are being produced by ants or other insect pests.

Have ant pests ever established one or more nests within your home?